“Considering the Sacred Heart as we interiorly reflect” by Rev. Paul Berghout (@FatherPB)

“Considering the Sacred Heart as we interiorly reflect” by Rev. Paul Berghout (@FatherPB)

Palm Sunday of the Lord's Passion

Piety
I gave my back to those who beat me, my cheeks to those who plucked my beard; my face I did not shield from buffets and spitting.  Isiah 50:6

Christ Jesus, though he was in the form of God,
did not regard equality with God
something to be grasped.
Rather, he emptied himself,
taking the form of a slave,
coming in human likeness;
and found human in appearance,
he humbled himself,
becoming obedient to the point of death,
even death on a cross.  Philippians 2:6-8

Then stepping forward they laid hands on Jesus and arrested him.
And behold, one of those who accompanied Jesus
put his hand to his sword, drew it,
and struck the high priest’s servant, cutting off his ear.
Then Jesus said to him,
“Put your sword back into its sheath,
for all who take the sword will perish by the sword.
Do you think that I cannot call upon my Father
and he will not provide me at this moment
with more than twelve legions of angels?
But then how would the Scriptures be fulfilled
which say that it must come to pass in this way?”  Matthew 26:51-55 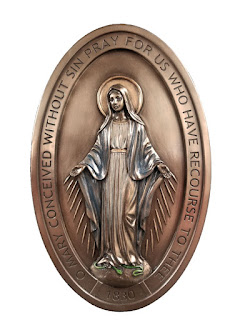 God’s saving plan, “the mystery of his will,” mentioned in Ephesians 1:9, teaches that all creation makes one significant circular movement from God and back to God to “recapitulate” all things in heaven and on earth in Christ (Eph 1:10).

Regarding the Big Circle, St. Maximilian Kolbe says that Consecration to Mary uses us wholly and without reserve to accomplish Mary’s mission of crushing the head of Satan (Genesis 3:15) to extend the blessed kingdom of the Sacred Heart of Jesus.

The motto of the Militia Immaculatae (Latin for “Army of the Immaculate One”) is “To lead all men and every individual through Mary to the Most Sacred Heart of Jesus.”

The source of all grace:

- FROM the Sacred Heart of Jesus THROUGH the hands of Mary.

-THROUGH Mary, The Miraculous medal depicts Mary standing on a globe with rays of light (graces) streaming from the rings on her fingers.

- “Mediatrix of all grace” is an idea expressed in Kolbe’s Marian consecration- “God has willed to entrust the entire order of mercy to Mary.”

Jesus wanted to complete that Circle from God and back to God for us.  That is why Jesus wanted neither the sword nor legions of angels to stop his saving plan.  Jesus is completing the plan through his Passion and death on the Cross. (“Put your sword back into its sheath, for all who take the sword will perish by the sword.” Matthew 26:52).

We heard Jesus’s teaching in Matthew 3:38-48 during Lent: Do not counter violence with violence, or it will bring evil upon you.

Pilate’s wife could not stop the Passion. She sent Pilate a message, “Have nothing to do with that righteous man. I suffered much in a dream today because of him.” 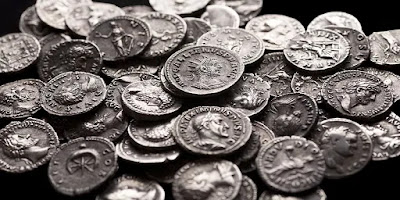 Judas’ returning the thirty pieces of silver could not stop the Passion of the Christ either.

The kiss of betrayal was to fulfill and complete what happened to King David during the Sheba uprising. David sends his general Joab to the northern front, where he meets his political rival Amasa. After extending a fraternal greeting, Joab grabs Amasa by the beard, tenderly kisses him, and fatally stabs him. As the commentators say, “Joab’s kiss and Judas’s were very much alike.” (Matthew Henry). In both, the traitor leaves Jerusalem with a large group, comes upon a brother, greets him, seizes him, kisses him, and brings about his death.

It was also a low point for Peter, perhaps the worst moment of the worst day of his life.  Lastly, Peter denied Jesus three times, under oath, but unlike Judas, Peter did not kill himself.

Peter returned to the disciples, who reminded him that Jesus forgives sinners. Judas never went back.  He deeply regretted what he had done, returned the thirty pieces of silver to the chief priests and elders, saying, “I have sinned in betraying innocent blood.” They said, “What is that to us?

When sadness and regret burden us, retreating into isolation is tempting but dangerous. (Prov. 18:1) The wise course is to stay close to fellow believers and regain spiritual strength (Heb. 10:24, 25).

A parade could not stop the Passion of the Christ--

Author John Naisbitt remarked, “Leadership involves finding a parade and getting in front of it.” Jesus wasn’t looking for a parade. The parade was looking for him.

Action
Only if we don’t repent from sin can we stop the Passion of the Christ from saving us.

We act by reason and will, but we don’t always choose God’s will. And if we sin gravely and don’t fully repent, then we won’t make it back to God. The failure to return to God is the great tragedy of human life.

But thanks be to God! For he sent his only Son to save us and bring us back to God.

Jesus says: I’m not going to ride above you, all high and mighty. I’m going to be here on your level.

Posted by Anthony DeCristofaro at 8:28 AM No comments: Links to this post

Thursday of the Fifth Week of Lent

Jesus answered, “If I glorify myself, my glory is worth nothing; but it is my Father who glorifies me, of whom you say, ‘He is our God.’ You do not know him, but I know him. … But I do know him and I keep his word. Abraham your father rejoiced to see my day; he saw it and was glad.” So the Jews said to him, “You are not yet fifty years old and you have seen Abraham?” Jesus said to them, “Amen, amen, I say to you, before Abraham came to be, I AM.” (John 8:54-58)

Piety
Brother Jesus, may I come to know God ever more and keep his word with your guidance and stirrings with my heart.

Study
Jesus attempts very pointedly to explain to the leaders that he and God are related in his use of I AM.  Today we understand his words to illustrate two persons of the Trinity; to the Jewish leaders, they thought he blasphemed.  As the notes to the NAB state, John’s use of the term I AM “is the one reserved for the Logos,” preexistent with the Father.

The Jews could not see past the reality that Jesus was human. God’s gift of faith allows us to see in his humanity how we can touch the “I am” within us which links each of us to the divine wholeness that is God.  Consider that we can touch “I am” placed within each of us by Jesus’ humanity and divinity.  As we shed tears of loss just like Jesus most certainly shed over the deaths of beloved grandparents Anne and Joachim, we know him.  The potent awe felt as we witness a beautiful sunset leads us to an “I am” as surely as Jesus watched and admired Nazareth skies, perhaps even thanking the Creator who placed such art into the sky for his – and our - enjoyment. We are linked to him who walked dusty roads as our feet are sore and shoulders achy from our honest labor whether Jesus touched a laptop or not. We know “I am” through excitement tempered with sadness when we leave comfortable environments even as Jesus must have experienced when he finished hammering together that last table or chair in Joseph and Son’s carpentry shop, preparing to leave his hometown forever to be about his Father’s business. When we touch our deep, human moments we can be sure that Jesus our brother touched those moments too.  The “I am” that is us is bound to “I AM” when we accept God’s gifted, covenant relationship and keep God’s covenant which is fulfilled in Jesus.

Action
Each day we have the opportunity to reconnect with our Lord and Savior through his Brotherhood.  As we go about our tasks, consider each one a connection.  Take each moment for a prayer – gratitude for the comfort of our home, cozy as Jesus must have been in Nazareth.  Solidarity for those who do not have enough to eat as we drink our coffee this morning, welcome as Mary’s bread must have been to her hungry son.  Solidarity with those who are ill as we take our vitamins or medications.  Make your day a keeping-faith, covenantal day with Jesus.
Posted by Anthony DeCristofaro at 7:14 AM No comments: Links to this post