His Servant from the Womb

His Servant from the Womb

Though I thought I had toiled in vain, and for nothing, uselessly, spent my strength, yet my reward is with the LORD, my recompense is with my God.
For now, the LORD has spoken who formed me as his servant from the womb, that Jacob may be brought back to him and Israel gathered to him;
And I am made glorious in the sight of the LORD, and my God is now my strength! It is too little, he says, for you to be my servant, to raise up the tribes of Jacob, and restore the survivors of Israel; I will make you a light to the nations, that my salvation may reach to the ends of the earth. Isaiah 49:4-6

John heralded his coming by proclaiming a baptism of repentance to all the people of Israel; and as John was completing his course, he would say, 'What do you suppose that I am? I am not he. Behold, one is coming after me; I am not worthy to unfasten the sandals of his feet.' Acts 13:24-25

When the time arrived for Elizabeth to have her child, she gave birth to a son. Her neighbors and relatives heard that the Lord had shown his great mercy toward her, and they rejoiced with her. When they came on the eighth day to circumcise the child, they were going to call him Zechariah after his father, but his mother said in reply, "No. He will be called John." Luke 1:57-60

Piety
You, My child, shall be called The prophet of the Most High, For you will go before the Lord to prepare His way, To give his people knowledge of salvation By the forgiveness of their sins. In the tender compassion of our Lord, The dawn from on high shall break upon us, to shine on those who dwell in darkness And the shadow of death, And to guide our feet into the way of peace. (From “The Canticle of Zechariah” Luke 1:76-79)

Study
From that infamous leap in the womb, John was set apart from every other boy.  That continued with his name. Zechariah and Elizabeth set tradition aside and followed the will of God as revealed to them mysteriously.  Instead of Zechariah the Baptist, we have John.

John is not just any servant.  He specifically has a mission to “reach the ends of the Earth.”  John is not only opening the ear of the Jews to the word of the Lord, but he is setting forth a path to reach all people.

In an essay on the “Power of Names,” Rabbi Benjamin Blech noted that names represent our identity not simply because they are a convenient way to distinguish us from one another. Names define us. Our names are not accidental. They are to some extent prophetic. They capture our essence. They are the keys to our soul.”

Most of us have no choice over our name.  We grow into it.  However, when elected Pope, a new name symbolizes how life is changed forever.  This shows that the path taken from the womb has changed.  However, his servanthood has elevated to become the servant of the servants of God.  It's not required, but it's almost surely going to happen.

In 1978, Cardinal Albino Luciani became the first pope to take a double name.  John Paul I honored his two immediate predecessors -- John XXIII and Paul VI.  He had been elevated to bishop by John XXIII, then to Patriarch of Venice and the College of Cardinals by Paul VI. John Paul I was also the first pope in almost 1,100 years since Lando in 913 to adopt a papal name that had not previously been used. After John Paul I's sudden death, a month later, Cardinal Karol Józef Wojtyła was elected and, wishing to continue his predecessor's work, became the second Pope to take a double name as John Paul II. In 2013, a new name was introduced into the lineage: on being elected Pope, Cardinal Jorge Mario Bergoglio selected the name Francis to emphasize the spirit of poverty and peace embodied by Saint Francis of Assisi. 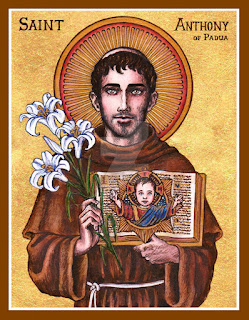 Some say that it would be a welcome change for popes to be called by their baptismal name. This would be more in line with the famous saying by St. Augustine that underlined the importance of baptism over holy orders: "I am fearful of what I am for you, but I draw strength from what I am with you.  For you, I am a bishop, and with you, I am a Christian. The former designates an office received, the latter the foundation of salvation.” [1]

These names depict both tradition (past), mission (present) and future (legacy).

It remains customary to name children after those whom we deeply admire or seek to memorialize. I am named after my maternal grandfather Anthony Rizzo.  Also, my saint namesake is St. Anthony of Padua whose feast we celebrated two weeks ago.

To link a newborn with someone from the past and a saint is to bring together the past and the present and the future.  However, rather than using traditional naming conventions among the Jews, Zechariah and Elizabeth broke with tradition and obeyed the message of an angel who declared that their baby would be called John.

Action
It was not ONLY what the name “John” meant but more the symbolism of the new and different name that is important to us.  If the baby were Little Zach, he would have followed in his father’s footsteps and likely become a priest. Not a bad thing!

John would not only follow his father’s steps.  He would set out on a different path with different sandals.  First, like Jesus, he would learn to do what his father did. But John would go beyond that role.  It isn’t the meaning of the name “John” which is so essential, then, but the message implied by having any name other than Zacharias which is such an emotional issue.

In fact, John fulfilled the symbolism of his name and the poetic words of the Canticle of Zechariah:  He was a light shining “on those who sit in darkness and death’s shadow, to guide our feet into the path of peace.”  The path of peace is the literal and symbolic path that leads to Jesus.

What is your name – and are you living up to it?

What are you called to do?